A New Years Resolution on Valentines Day.
I have known this for awhile, but just realized yesterday, that I have almost given up two things that used to be a huge part of my life before baby. These are things that helped to make up who I am as a person, things that I enjoy, things that keep me sane and help me breathe. One, of course, is baking. the other, which I am still trying desparately to bring back into my life, is running. Since we have been away since around the new year and now are back, I am jumping on to this NY resolution thing a bit late, but I am really going to try and make more of an effort to bring both back. for me. Not that I dont absolutely love being a mom. I do. I just need to start doing things for me too. I feel like I have lost a part of myself. I want it back. I want to get my heartrate up. I want to sweat. I want to burn my hands pulling bread from the oven. (well, not really, but..) I have been introduced to this new part of my life, but a piece of me yearns for a little bit of the old part as well.

so, that said, I did a little baking yesterday.

Being Valentines Day and all, I couldn't resist.

While in London, I bought all the ingredients for making crumpets. We had them often, and I had almost forgotten they existed until we arrived in London. A cross between a yeasted bread and a soda raised bread, crumpets are cooked like pancakes after they have risen. then, you either let them cool then toast them, or as we did yesterday, eat them straight off the griddle. I recommend the latter. with a little honey, they transported us back to London, if only for a few minutes. 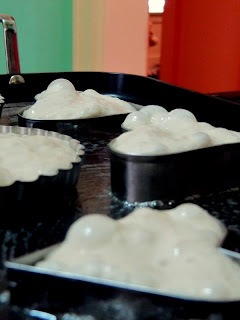 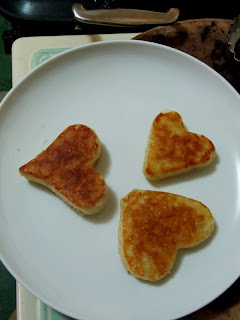 T really likes lemon, and instead of making his all time favorite lemon tart from the Cafe Juanita days, I opted for a more simpler lemon buttermilk pudding cake. super easy to make, and how cool, the cake separates into 2 layers while baking. a pudding like layer on the bottom, with a light cake layer on top. not too heavy and actually not terribly bad for you either. 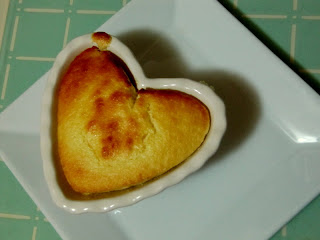 there, some baking under my belt. now, I just need to get those running shoes back on.
By request, here is the crumpet recipe: adapted and slightly altered from The Bread Bible by Rose Beranbaum
1 cup plus 1.5 Tabl flour
1/2 c milk
1/4 c water
1 teas dry yeast
1/2 teas sugar
1/2 teas salt
1/4 teas baking soda
put flour, yeast, sugar, salt in mixer and stir to combine. then, add water and milk that has been scalded then cooled to room temp. mix the dough for 5 min on medium. then, let the dough rise until doubled, about an hour. when ready, add the baking soda dissolved in 2 T water. stir it in then let it rise 30 minutes. in the meantime, prep your rings by brushing with butter and preheat your griddle or frying pan over low heat.
set rings in the pan and scoop the batter into them, 2/3 full. cook for 10 minutes on low, then, when the tops have lost their sheen, flip them over. and continue cooking until browned on the bottom.
3 comments:

The Coolest Retro Sale Ever. 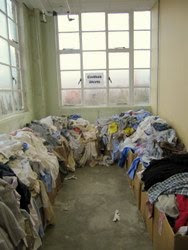 I have Amy to thank for telling me about this sale. It was put on by a costume warehouse, and there was a ton of old and crazy stuff there. I had a field day, but I imagine if I was really into dressing retro, it would have been absolute heaven. But, I did manage to find a few things. I found a leather coat that fits a little snug, but I just couldnt walk away from it. (leather can be stretched, right?) You basically pick a bag, 20pounds for Small, 50pounds for Large and fill it with whatever will fit. I ended up with a couple things for Z, a blazer for Q and my leather jacket. It was incredible to walk around and see all this stuff though. old military jackets, crazy hats, school uniform blazers..clothes, hats, jackets from every era, 40s up through the 90's.
It was a little overwhelming, rifling through all the boxes..and, it was difficult to try anything on. people were crammed into corners with their loot, sorting through it, trying things on however they could.
But, it was alot of fun. 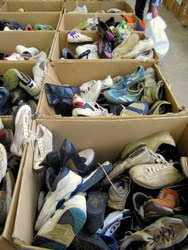 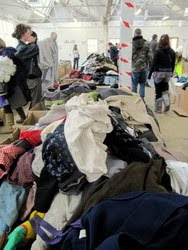 Keep up with me!!

Index of Past Blog Entries...